Coal dust – which may be a component of urban dust – is of concern to many communities, particularly those near coal mines, railroads and ports. To reduce dust concentrations, we need to first understand where the particulates originate from by characterising the particles that comprise the dust. This should be done in a way that is acceptable to community groups, residents and experts, to result in evidence-based policy.

Why do we need to investigate urban dust?

Communities, industry, government and academic bodies, and politicians are concerned about the health effects of urban dust. To create effective policies to reduce dust concentrations in the air, the amount, composition and size distribution of the particles in urban dust need to be characterised consistently and accurately.

Coal dust is fine, powdered coal, formed when coal is crushed or pulverised during mining and transportation. Coal dust can sometimes be a component of urban dust, which may also contain soot, dirt, metal, paint, and insect and plant detritus. Coal dust is an issue of community concern, particularly associated with the handling of coal on railways and ports in urban environments.

Urban dust samples can be qualitatively and quantitatively characterised using chemical and microscopic methods. This article looks at reflected light microscopy methods – the manual point counting method and the automated imaging analysis method. These methods can distinguish carbon-based particles, such as rubber, organic material and diesel soot, in addition to coal particles.

How can we characterise urban dust samples?

The collected dust sample is mixed with a polyester resin and allowed to cure; the set block is then cut and polished to a mirror finish. When prepared this way, the samples can be studied using a high magnification (500×) so that the different urban dust particles can be identified visually by an expert petrographer. Dust particles can also be characterised by their reflectance histogram using an imaging system.

For this article, the manual point counting method was used to characterise a sample collected from a rooftop near the coal port in Gladstone, Queensland.

Coal grain analysis (CGA) uses image processing software that combines high-resolution colour images derived from optical reflected light microscopy. The software creates a reflectance histogram, or fingerprint, for each individual particle in the image of each sample. The fingerprint is then used to differentiate the coal and non-coal particles.

The verification step was automated by creating reflectance fingerprints from the CSIRO known reference samples (see Figure 3). After the software classifies each particle in the image, a skilled petrographer then validates the characterisation of each particle. The Australian Coal Association Research Program is funding work to develop ‘optical dust markers’ that use the reflectance fingerprints of the samples in the CSIRO reference library to speed up and improve this validation step.

CGA was used to analyse 49 samples from 5 different locations in the Mackay region in Queensland, and an additional 19 samples from Newcastle, New South Wales.

Results of the urban dust characterisations

The manual point counting method found that one of the Queensland dust samples contained coal from a range of sources consistent with the known vitrinite reflectance fingerprints of the coals shipped through the Gladstone port. Vitrinite is one of the primary components of coal.

In one of the Newcastle samples, CGA identified size and composition information for 2912 individual particles (Box 1). The sample was found to contain particles of clays, quartz and organic material; iron particles; and small amounts of soot and rubber.

CSIRO has developed specialised software that identifies the composition of dust samples and the amount of different particle types in the sample. Researchers can upload images from the CGA to a website. Figure 4 shows results for the Newcastle sample: 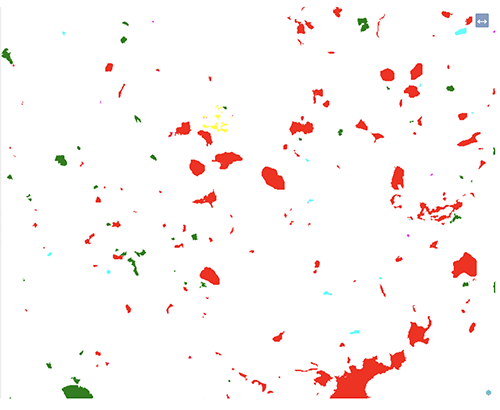 Why do we need two different characterisation methods?

Therefore, combining the methods will provide a more quantitative analysis.

This article was based on:

Environmental mercury that is absorbed in the diet can have serious effects on human health, including neurological and reproductive effects.